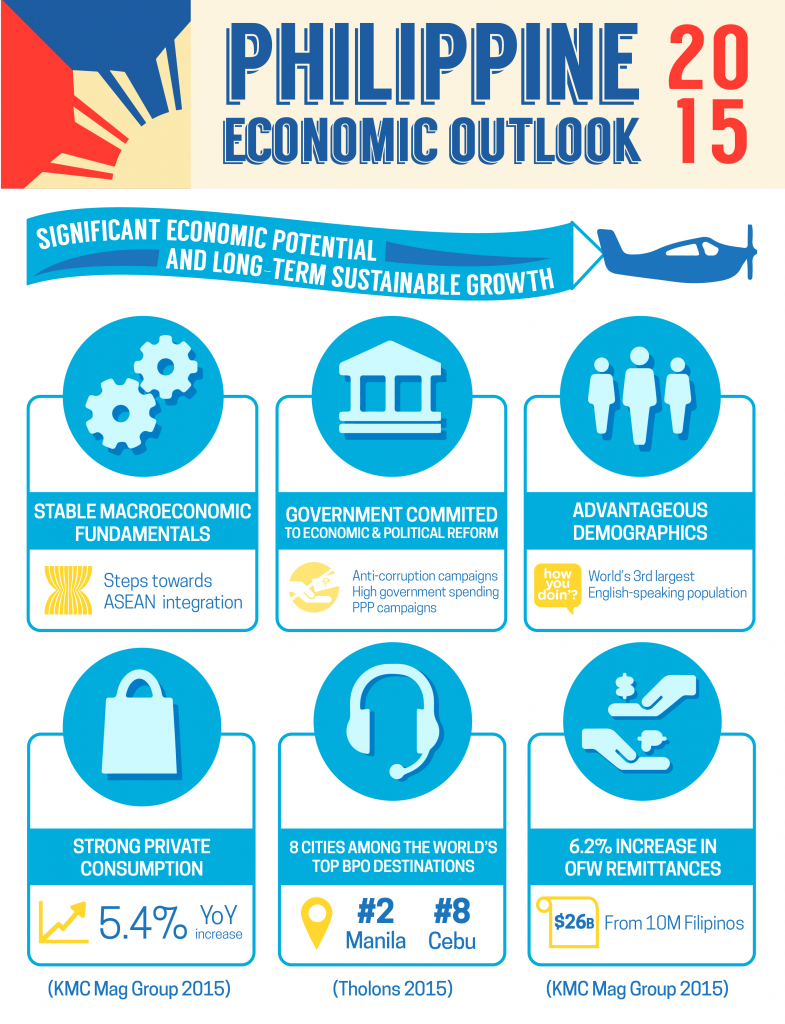 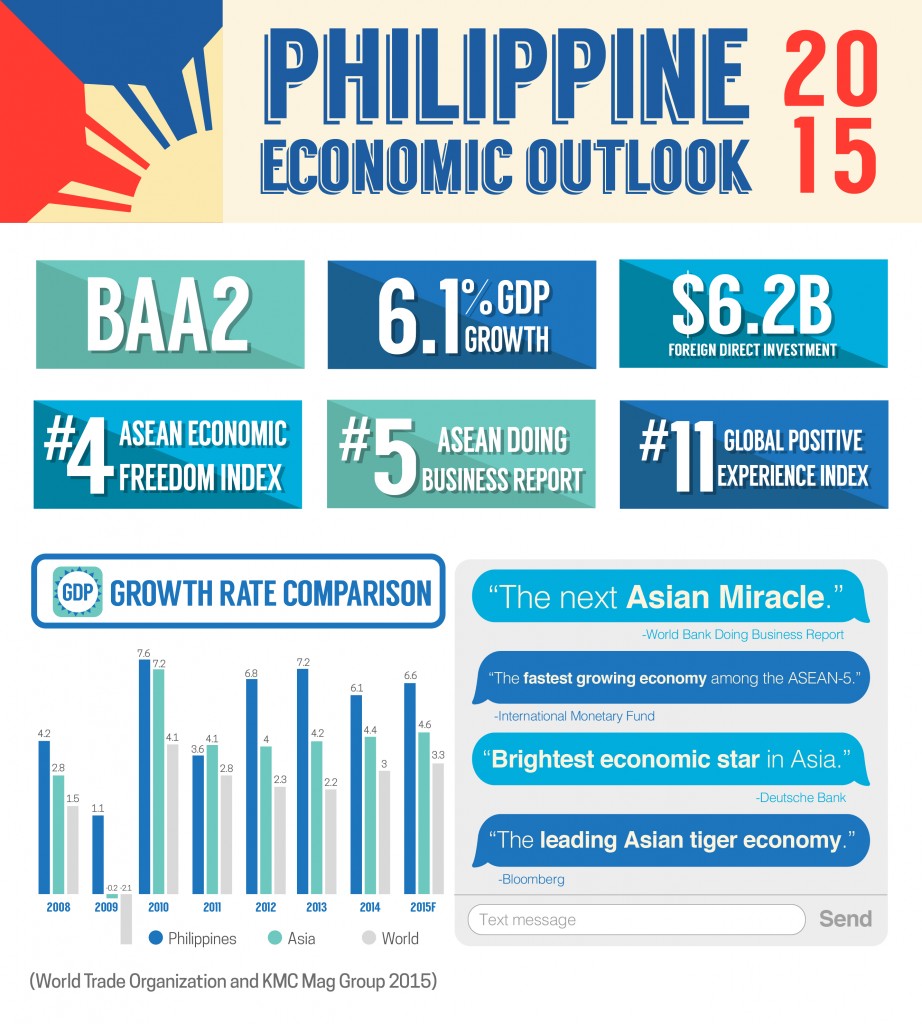 The Philippines continues to exhibit significant economic potential and long-term sustainable growth, proving that it is, beyond doubt, a good investment country.

With the boost in anti-corruption campaigns, increased government spending on public-private partnership (PPP) projects, and the efforts towards the ASEAN Integration, “the next Asian Miracle”, as the World Bank Doing Business Report puts it, secures its economic and political status in 2015.

The Philippines is the fastest growing economy in the ASEAN-6, with a 6.1% Gross Domestic Product (GDP) growth in 2014. Forecasts for this year, on the other hand, show an even greater promise. A 6.6% GDP growth is expected, which substantially towers over ASEAN’s 5.2%, Asia’s 4.6%, and the global 3.3% forecast according to KMC Mag.

Accounting for a large part of the GDP growth is strong private consumption with a 5.4% year-on-year increase. Meanwhile, OFW remittances remain a fundamental factor for economic growth gaining over 6.2%, or approximately $26 billion from more than 10 million Filipinos.

The Philippine economy continuously attracts strong investor confidence accounting for a $6.2 billion increase in Foreign Direct Investment (FDI) in 2014. Other than the expansion of existing foreign business operations, these FDIs are also used to finance new job-generating enterprises.

Due to ongoing debt reduction, improvements in fiscal management, favorable prospects for economic growth, and limited vulnerability to common risks affecting emerging markets, Moody’s promoted the Philippines to a BAA2 rating — an indication of a strong economic potential.

The numbers continue to speak for the Philippine economy as its rankings across reports and indices jump a couple of notches.

The Wall Street Journal and the Heritage Foundation’s Economic Freedom Index rates and ranks economies in 10 categories namely business freedom, investment freedom, monetary freedom, government spending, property rights, freedom from corruption, financial freedom, labor freedom, fiscal freedom, and trade freedom. The Philippines consistently improves its overall standing currently sitting as no. 4 among ASEAN nations, and at no. 76 in the world. It is the most improved country since 2011.

The World Bank Doing Business Report, on the other hand, evaluates business regulations and their enforcements, and ranks economies accordingly. With a 53-notch jump from 2011, the Philippine economy holds the record for the largest gain in the region. It is currently no. 95 out of 189 countries, and is no. 5 among ASEAN nations.

The increasing demand for real estate properties presents opportunities for developers and investors alike. Central business districts and other prime locations in Metro Manila have been transformed into principal residential and commercial communities, paving the way for new investments and bigger markets.

Megaworld at The Fort, for example, has established developments that respond to the nation’s upward growth and rising demands. Premier condominiums, top-grade offices, first-class leisure attractions, reputable academic institutions and chic commercial destinations occupy leading townships such as Uptown Bonifacio—compellingly reminiscent of the Philippine’s flourishing economy both now and in the future.